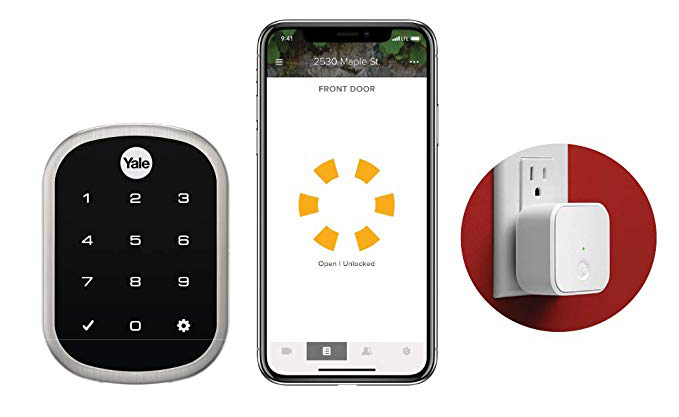 I have been wanting to find a SmartLock with quality, durability, compatibility, design and consistent functionality. Having always been a fan of Schlage and Baldwin, I started there and checked out a variety of other brands including August, Kwikset, Nest, Yale and Friday.

Baldwin doesn’t make SmartLocks, Schlage has a weathering problem with rain and heat (it leaks and melts) and I live in Florida, the Friday was just plain ugly, the Kwikset lock is boring and the others, well I had to figure out compatibility-wise what I wanted. Being still undecided on if I want to use HomeKit, SmartThings, Google Home or Amazon Alexa I chose the Yale Lock w/August. The Yale Assure lock is sealed to fix Schlage’s weathering problems and they’ve been around since the 1860’s. They’ve perfected the lock and key system and August makes it usable across any of the big players for smart hubs. This decision came after a few weeks of research online and getting some real feel time on the locks at local stores.

I got this lock for Christmas (early). Almost returned it because I couldn’t get it to be consistent on opening and closing. I figured it was the app (nope). After 1.5 hours of it consistently locking up no matter what I tried, I decided maybe the depth of the bolt hole could be the problem. (I had tried left/right and up/down “obstruction” clearing with no avail and was done and ready to return it so this was the last straw.)

I grabbed my drill with a bit and just dug out the bolt hole so it was a bit deeper. When I went to lock the bolt by hand, I heard and felt an extra click. Since then I tried to make it lock up for 15 min pushing/pulling using the app and the keypad and it’s now working great!

Don’t give up if it’s not working it’s most likely an obstruction! Check for that extra click after you lock the deadbolt!

My initial review was 3 stars for struggling with install and the unclear wifi setup.

Now that I have had this lock installed for four months, I feel like I can honestly review it. The Yale w/August has been one of the best purchases I have made in a while. It is super convenient compared to a lock and key. I have never had a problem with disconnecting, the app opens quickly and connects quick enough for my use.

I get notifications every time the door is locked, unlocked or left opened. I made multiple codes so I can give it out if I need to. When I’m away, I can open the door for a service tech from just about anywhere. It has never gotten stuck mid lock or unlock cycle and has even been pressure washed without any issues. I don’t know why I didn’t purchase this sooner. I definitely had reservations at first but it has proven itself worth of a good review.

In the end I give this lock 5 stars

One helpful article for your own research lives here: https://www.pcmag.com/article/344336/the-best-smart-locks